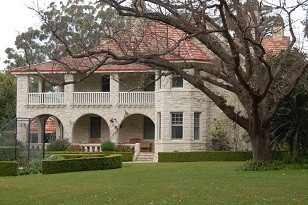 Designed in the 1890's by Howard Joseland, and originally named "Greystanes" the home was built for Dr Francis Pockley one of the North Shore's earliest doctors (later to become a leading opthamlic surgeon). Dr Pockley was an avid early motorist and went on to become one of the early directors of the NRMA. When Dr Pockley died the property was purchased by the Catholic Church and was used as a retreat house by Franciscan Fathers. It was renamed Mt Alverna after the village in Italy where St Francis of Assisi is said to have received the stigmata. In 1987 the property was sold and with Council approval subdivided into 11 lots. The original homestead was listed by the National Trust.