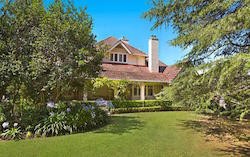 Formerly known as "Yarrow Brae", it had been the home of the Asher Smith family whose son, Charles, had been killed in action in May 1917. The War Memorial window in St Johns Church had been unveiled by Mrs Asher Smith when the new church opened in 1930. In the 1960's the home was that of the stockbroker, JH Cooper.